Sarah Josepha Hale was the first female editor for the women’s magazine, Godey’s Lady’s Book, established in 1837. She wrote topics on women’s education, argued for greater economic independence for women, the importance of exercise, property rights, and sensible fashion. The magazine became the leading women’s literary and fashion magazine for the next four decades. Prior to writing for Godey’s  Lady’s Book , Hale wrote a collection of  poetry that was published called The Genius of Oblivion (1823), in order to support her five children. She also published a book of poems, written in a form that was meant to be sung, her most famous works, “Mary’s Lamb,” known today as “Mary Had a Little Lamb” 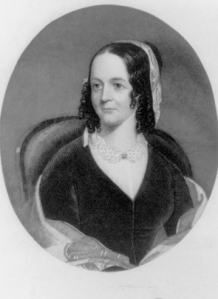 Who do you think about when asked who your favorite woman author is? Is it Jane Austen? J.K. Rowling? One of the Bronte sisters? Maya Angelou? Stephanie Meyer? Emily Dickinson? Agatha Christie? Or someone completely different?

What makes women authors so special?

They are innovators. They fought to get to where they are now.

Some of the first women writers wrote under disguised male names so that they could actually be published! Charlotte and Emily Bronte used male pen names. Charlotte Bronte was “Currer Bell” and Emily Bronte was “Ellis Bell” as their pseudo names. Even some well known modern women writers have published under a male pseudonym. J.K. Rowling has published under the name “Robert Galbraith” for some of her writings.

Women writers have gone through so much to get to right where they are today. I came across an article on Hello Giggles website about what some of these amazing women writers went through to get to where they are. The Bronte Sisters, George Sand, Marie d’Agoult, Willa Cather, George Eliot, Dorothy Lawrence, and Louisa May Alcott were featured in this article. While some of the names previously mentioned are pseudonyms, they give the authors actual name and a little bit about them and their struggles.

Personally, I have several favorite women authors. Jane Austen, Emily Bronte, Sarah Dessen, Richelle Mead, Cassandra Clare, Rachel Caine, and J.K. Rowling are just a few of my favorite writers. They have changed the way writing is done and paved the way for future women authors. These women are inspiring. They have even inspired me to write myself and one day I hope to be named with these amazing women authors.

In a profession that was once only filled with men and even referred to as a man’s job, women have pushed through and made some incredible marks in history. While we still have a long way to go we should celebrate the victories we have seen. Below is a timeline of some of the highlights in our history.

Welcome to Women in Journalism, a blog created by four journalism students: Ashley, Carrie, Danielle and Melissa. From past to present and aspiring to famous, we can’t wait to share information about all things journalism in relation to women.